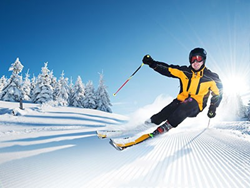 Recent freshies on top of a March 2 storm that dropped up to three feet of new snow have graced Lake Tahoe ski areas. Now a package from The Landing Resort & Spa, Lake Tahoes only five-star luxury lakeside property, allows spring skiers to choose among four nearby world-class Tahoe ski areas, each with its own unique character and interestingly varied terrain.

The new ultra-luxe boutique hotels Soft Landing ski package provides top skier perks from boot warmers to comfy complimentary Mercedes Sprinter transport to the slopes, a choice of where to ski for two days, and a night on the town at one of two sought-after South Lake Tahoe casino shows. After all the winter fun, guests return to the perfect soft landing in the five-star accommodations at The Landing including cozying up in plush robes before crackling in-room fireplaces while enjoying azure Lake Tahoe views.

Resort amenities for skiers include complimentary ski storage with boot warmers and valet service, as well as expert advice on the snow and the slopes, and complimentary transport via Mercedes Sprinter to the Heavenly Gondola and to the Transportation Center with shuttle service to Sierra at Tahoe, Kirkwood or Northstar.

The two-night Soft Landing Ski Package for two starts from $ 959 and includes two lift tickets each day for two days of spring skiing (four tickets total) at guests choice of Lake Tahoes Heavenly, Sierra at Tahoe, Kirkwood or Northstar ski resorts. Two tickets to one of two popular casino shows also are included in the package for apr